The term ‘Blockchain’ is the latest buzzword in the digital diaspora today with custom Blockchain development the next budding prospect for enterprises. To put the Blockchain workings in simple words – It helps people draft entries into a ledger while a community of users inspect and command how this record of information is updated into the ledger. 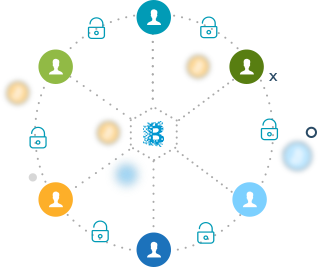 Both Public and Permissioned Blockchains for businesses are decentralized peer-to-peer networks, where every user preserves a copy of a shared append-only ledger of digitally signed transactions. The key difference between public and permissioned Blockchain is participation i.e. who has access to the network and authority to execute the consensus protocol and maintain the shared ledger.

Today a variety of industries are eyeing the prospect of custom Blockchain development. The enormous potential and rapid development of permissioned Blockchain technology is thus,leading more and more businesses to work on permissioned Blockchain solutions development. According to Eugene Lopin, CEO of CHEX, “A permissioned Blockchain is hardly different from a traditional database. The term is synonymous with glorified databases. But the advantage is that if they are to ever start adding public nodes to it then it becomes so much more. An open Blockchain is the best method for having a trustless ledger. The broader the range of decentralized adoption the better it is”. Keeping in view the current trend, it wouldn’t be long when every aspect of human enterprise will directly or indirectly be influenced by permissioned networks.

Enterprise-grade Blockchain solutions make a strong case in terms of the overall efficiency in process, improved data quality, better turnaround time and of course increased trust factor amongst the participants in the ecosystem.

The essence of enterprise-grade Blockchain solutions lie in making it a consumable technology. There are a number of aspects that need to be taken into account before panning out permissioned Blockchain for businesses, some of them are mentioned as under:

For complying by the standards set by regulated systems and statutory authorities regarding non-repudiation, fraud analysis, technology root cause analysis and other enterprise systems.

Unlike public Blockchains, in enterprise-grade Blockchain solutions the participants have well- defines roles and are thus, required to be identified and tracked

For complying by the regulations and generally accepted IT practices regarding high availability, capacity planning, pattern recognition and fault identification.

This includes integration with incumbent System of Record (SoR) to aid both existing and incumbent systems, have Blockchain as a transaction processingsystem to secure SoR as a temporary approach for adopting Blockchain and opting for least disrupting path to speed up enterprise adoption.

It is important to generate connectors for existing SoR to delegate the reporting and regulatory requirements till the time the Blockchain gets familiar with the enterprise software or vice-versa.

What is the Future of Permissioned Blockchain for Businesses?

Blockchain is touted to be the next big thing in the financial sector. It could be a dominating force in future shaping the global finance ecosystem. Consider what Patrick Dugan, Board Member of the Omni Foundation has to say about the future of public Blockchain and permissioned Blockchain for businesses – “Permissioned Blockchain, or as I like to call them, shared databases, have a place in improving efficiency for financial institution for back-office settlement processes. They should not be seen as controversial, or part of some dialectic struggle between punks and police. To the extent that the identifying shroud of AML/KYC can be placed into public Blockchain metadata (possible in Omni Layer transactions over the Bitcoin Blockchain) there may even be interoperability between these two sides of the train tracks. Right now, due to state-granted monopolies to issue credit, most of the world’s liquidity is still in banks. However, we believe that in the long-term, public Blockchain, especially those based on work, will come to take a more significant part in the ‘System D’ informal economy, which is where most of the global economic growth will originate.”

Some of the possibilities that we can expect in future with the advent of Blockchain are:

With the multifold possibilities that Blockchain technology has to offer, we at Vertilex are striving at tapping the best of it for our clients. With a team of expert Blockchain consultants who help identify and analyze the different use cases of Blockchain for your business, you can be rest assured to get most befitting enterprise-grade Blockchain solutions.

Drop us a mail today to use our proficiency in permissioned Blockchain solutions development for validating your product idea, creating prototype, and designing a Blockchain as per your requirements.